This is what happens when you are running late…

You fall back on the same-old same-old types of outfits.  The tried and true pieces.  Not a bad outfit, but not a particularly innovative one.  I’m ok with that.  I’ll be innovative tomorrow, when I’m not dealing with a meeting with 3 VPs getting moved from 1pm to 9am.  I found out about the change right when I got up and ended up pulling out the first things I had that would look good and skipping the pictures until much later in the day.

I met up with a prior coworker last night after work and she suggested that to get better pictures I needed to get the camera up higher.  So in this case it is on top of my bookshelf.  I can see how it could help, although the lighting in my office (as with EVERY office) is bad enough that the overall finished product isn’t anything to brag about.

I ran out of the house so quickly this morning that I didn’t get to change out my purse either.  Of course, this is probably the best purse in my wardrobe to have that happen with; it goes with nearly everything I own!

It seemed like a good idea at the time….

Ever have an idea in your head that seems so good but doesn’t work when you put it on?  That’s today’s outfit.  I mean really, how could a silk tank go wrong?  But apparently, it’s a proportion thing.

So what am I not happy with?

Ah well.  Every outfit can’t be a winner.  And since I’m an OUTFIT blogger and not a fashion blogger (IE I don’t claim to know a ton about fashion, just about what I like and think looks good) I can get away with that!

Still, retiring this outfit after today; I may add the tank to the donate pile or possibly even try to sell it on ebay along with those purses.  Not like it would be a special trip to the post office.

If you have a moment, I would LOVE to collect some opinions on haircuts I am considering.  Take a moment and put a comment below on which of these you think would be most flattering on me (the cuts, not the colors…I’m not going blonde…):

Olive, Fuchsia, and Black, and a Haircut

Today is a relatively straight forward day at work.  No meetings, so time to catch up on the stuff that didn’t get done last week.  Both work stuff and not work stuff.

Since I have no meetings, I went for a relatively comfortable and easy-going outfit.  Not that it looks bad, of course.

I still love this scarf; it is soft and silky, not heavy, and adds some brightness to the outfit.  I didn’t tie it in any special way primarily because I liked the vertical line it was creating.

Speaking of ebay, I listed some of my purses last night.  My deal with my husband is that when the cupboard gets crowded it’s time to list some before any more arrive.  And since I have 3 in my current Little Black Bag, I figured that meant I needed to clear some space.  Each one listed is either too small or not a good shape for me/the stuff I carry.  If you are interested, take a look.  They all have comparatively low starting prices and competitive Buy It Now prices.

I am planning to get my haircut soon – this week (depending on whether the salon gets back to me on my appointment request for today).  I pinned a bunch of styles, but of course they never look like the pictures once they are on your own head.  The common elements are:

If you are looking to avoid work, feel free to flip through the pins and leave your advice/comments below!

Truth Tuesday:  Related to that former comment about a short neck and double chin, every single full length picture of myself that I post on here has a bit of retouching done to minimize the double chin.  I HATE my double chin.  It is the feature I despise the most about myself and the one about which I am most self-conscious.

I have lived with being heavy all my life and never been thin, so I’m mostly comfortable with that, but when I am flipping through the pictures I have taken I am always explicitly looking for the ones in which I can retouch my double chin into submission.  The close ups aren’t a problem, since the camera angle is different and I can see the image before it goes off.  I just wish I could do something similar with the full length pictures.

As one might expect, there aren’t a LOT of plus-sized ladies at the Oscars.  Still, I would have liked to see plus-sized fashion better represented. She just recently had a baby and her body has recovered well.  The beaded black is lovely and sparkly.  The dress is fitted well and skims her body.  I love the sheer sleeves.  My only negative is that the neckline seems very high for this type of event; I would have liked to see a somewhat lower scoop neck.  Still, this dress was successful.  I LOVE her hair down! 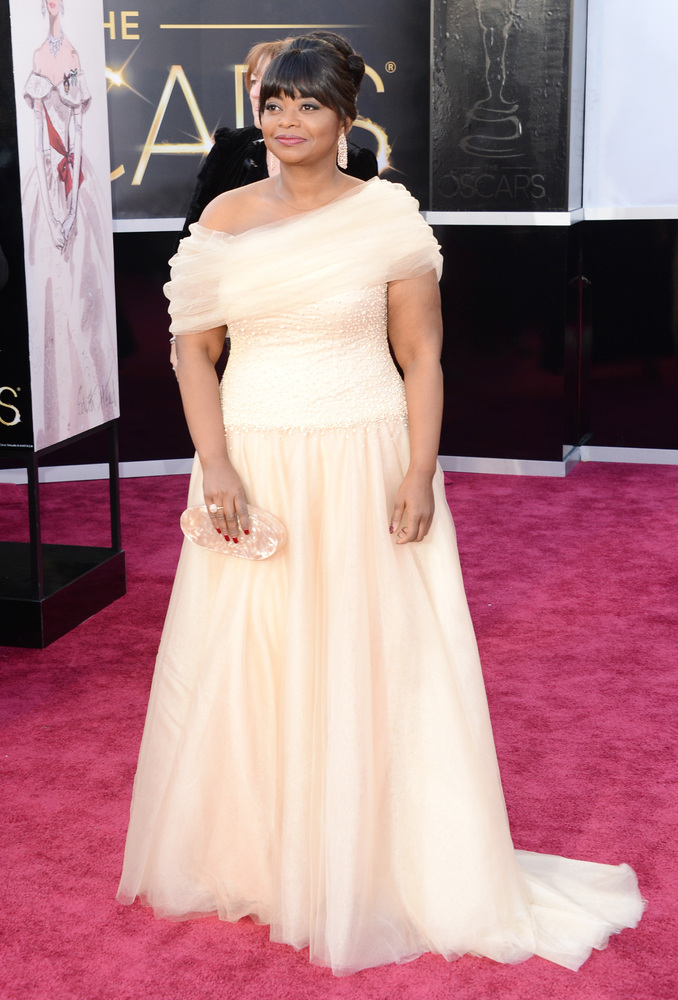 This dress is also perfectly fitted and quite lovely.  I’m not digging the color, but it suits her skin well enough.  (There is something subversive about a woman of color wearing a dress in what would be considered a “nude” on a white woman.)  This doesn’t make me go wow or want to run out to the designer (Tadashi Shoji), but I think she looks lovely. 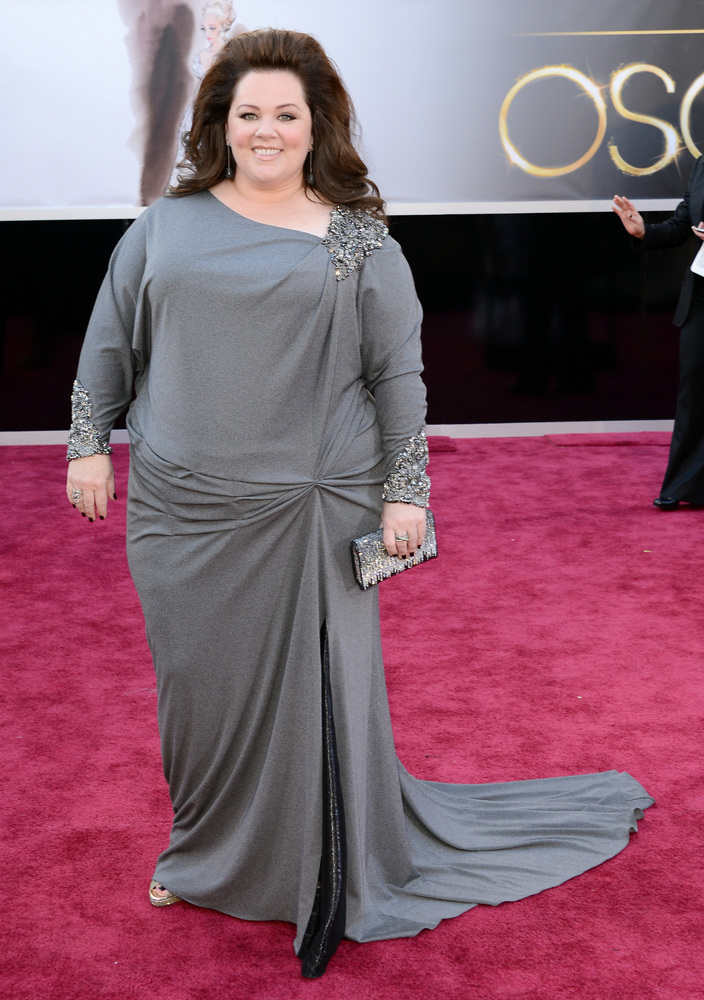 My first impression of this dress was as follows:  Melissa looks like a mother of the bride who is particularly embarrassed by her size.  And in the end that really is my biggest problem.  This is the dress of someone who has given up and now believes all the things that people say about fat chicks.

The only person out there who is MORE covered up was Emmanuelle Riva, who is old enough to justify it.  And it isn’t especially attractive on HER either.

In the end, Melissa, you are a BEAUTIFUL woman who managed to make herself look drab, colorless, shapeless and unattractive.  You have looked so much better at previous awards shows: 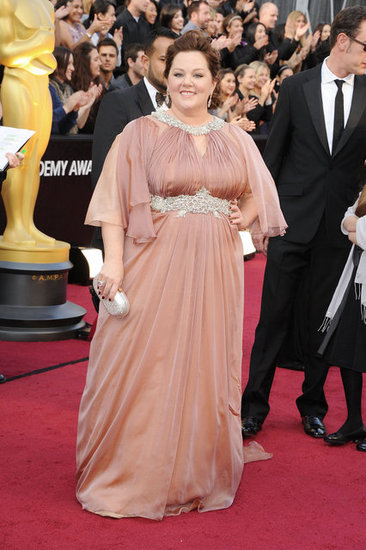 Critic’s Choice (ONE OF MY FAVORITES)

You have done better, and you can DO better.  We WANT you to do better.  I hate seeing the internet aflame with people hating on your dress.  Embrace who you are and your shape and make the most of it!  Leave the grey tents for … well, frankly no one.

Disappearing at a meeting

Have you ever had to go to a meeting where you really just wanted to fade into the background?  You didn’t want to get called on or any of that kind of thing?  Today’s outfit was inspired by just such a meeting (starting, I might add, at 7:30AM).  Now, I usually wear a LOT of bright colors and am rarely accused of being afraid to speak out, but meeting (over 100 people, with my bosses boss and his direct reports and their direct reports) was not something I wanted to deal with.  So here’s what I picked to blend in.

Yes, those pants are a color.  I know it’s hard to see in these pictures, but they are a deep burgundy color that CC calls Raisin.  You can see the shoes here as well.

(Having to be at a meeting at 7:30 meant there was no time for outdoor full-length pictures.

This sweater is one of my all time favorites. It’s soft and warm and has some shaping to it and I would buy it in every color of the rainbow.  Which is, of course, why it was only ever available in charcoal and the design hasn’t been done again since.  *sigh*

The black top is interesting, but gave me problems all day.  It has a criss-cross neckline, which always seems too low for professionalism on me.  I swear it’s pinned closed, but that just means you don’t see my bra.  It then has a band directly under the bust which gives the top a really nice shape.  I picked this black one and a brown one up on ebay for about $10 total.

I realize this isn’t one of my BEST outfits, but it fit my purpose of not being too noticeable while still expressing my style.  I was comfortable (or as comfortable as anyone could be in those truly hideous chairs) and confident, while not attracting undue attention to myself in a room full of people who knew far more than I did about the topic at hand.  To me, that’s a win.

Closeup of the jewelry and you can see the purse in the background.  Bonus points for resisting the urge to touch up/blur the wrinkles around my eyes (mostly under) That I can see now that I take a closer look at the picture 🙂

Bonus points to anyone who can identify the source of the image behind me when I’m standing up.  Yes, I have that on my office wall!  I love academia.